The myelodysplastic syndromes (MDS, formerly known as “preleukemia”) are a diverse collection of haematological conditions united by ineffective production of blood cells and varying risks of transformation to acute myelogenous leukemia. Anemia requiring chronic blood transfusion is frequently present. Although not a true malignant neoplasm, MDS is nevertheless classified within the hematological neoplasms.

Although there is some risk for developing acute myelogenous leukemia, about 50% of deaths occur as a result of bleeding or infection. Leukemia that occurs as a result of myelodyplasia is notoriously resistant to treat

In order to diagnose MDS one has to do a complete investigation including:

MDS is thought to arise from mutations in the multi-potent bone marrow stem cell, but the specific defects responsible for these diseases remain poorly understood. Differentiation of blood precursor cells is impaired, and there is a significant increase in levels of cell death apoptosis in bone marrow cells. Clonal expansion of the abnormal cells results in the production of cells which have lost the ability to differentiate. If the overall percentage of bone marrow blasts rises over a particular cutoff (20% for WHO and 30% for FAB) then transformation to leukemia (specifically acute myelogenous leukemia or AML) is said to have occurred. The progression of MDS to leukemia is a good example of the multi-step theory of carcinogenesis in which a series of mutations occur in an initially normal cell and transform it into a cancer cell.

While recognition of leukemic transformation was historically important (see History), a significant proportion of the morbidity and mortality attributable to MDS results not from transformation to AML but rather from the cytopenias seen in all MDS patients. While anemia is the most common cytopenia in MDS patients, given the ready availability of blood transfusion MDS patients rarely suffer injury from severe anemia. However, if an MDS patient is fortunate enough to suffer nothing more than anemia over several years, they then risk iron overload. The two most serious complications in MDS patients resulting from their cytopenias are bleeding (due to lack of platelets) or infection (due to lack of white blood cells).

The average age at diagnosis for MDS is about 65 years, but pediatric cases have been reported. Some patients have a history of exposure to chemotherapy (especially alkylating agents such as melphalan, mustard, cyclophosphamide, busulfan, and chlorambucil) or radiation (therapeutic or accidental), or both (e.g., at the time of stem cell transplantation for another disease). Workers in some industries with heavy exposure to hydrocarbons such as the petroleum industry have a slightly higher risk of contracting the disease than the general population. Males are slightly more frequently affected than females. Xylene and benzene exposure has been associated with myelodysplasia.

Myelodysplasia is a diagnosis of exclusion and must be made after proper determination of iron stores, vitamin deficiencies, and nutrient deficiencies are ruled out. Also congenital diseases such as congenital dyserthropoietic anemia (CDA I through IV) has been recognized, Pearson’s syndrome (sideroblastic anemia), Jacobson’s syndrome, ALA (aminolevulinic acid) enzyme deficiency, and other more esoteric enzyme deficiencies are known to give a pseudomyelodysplastic picture in one of the cell lines, however, all three cell lines are never morphologically dysplastic in these entities with the exception of chloramphenicol, arsenic toxicity and other poisons.

All of these conditions are characterized by abnormalities in the production of one or more of the cellular components of blood (red cells, white cells other than lymphocytes and platelets or their progenitor cells, megakaryocytes).

The exact number of people with MDS is not known because it can go undiagnosed and there is no mandated tracking of the syndrome. Some estimates are on the order of 10,000 to 20,000 new cases each year in the United States alone. The incidence is probably increasing as the age of the population increases.

The goals of therapy are to control symptoms, improve quality of life, improve overall survival, and decrease progression to acute myelogenous leukemia.

The IPSS scoring system can help triage patients for more aggressive treatment (i.e. bone marrow transplant) as well as help determine the best timing of this therapy. Supportive care with blood product support and hematopoeitic growth factors (e.g. erythropoietin) is the mainstay of therapy. Chemotherapy with 5-azacytidine has been shown to decrease blood transfusion requirements and the progression to AML. Lenalidomide is the newest addition in treatment options and was approved by the FDA in December 2005. It has the best activity in patients with the 5q- cytogenetic abnormality, with or without additional abnormalities.

Bone marrow transplant, particularly in younger patients (ie less than 40 years of age), more severely affected patients, offers the potential for curative therapy. Success of bone marrow transplantation has been found to correlate with severity of MDS as determined by the IPSS score.

Since the early 20th century it began to be recognized that some people with acute myelogenous leukemia had a preceding period of anemia and abnormal blood cell production. These conditions were lumped with other diseases under the term “refractory anemia”. The first description of “preleukemia” as a specific entity was published in 1953 by Block et al. The early identification, characterization and classification of this disorder were problematical, and the syndrome went by many names until the 1976 FAB classification was published and popularized the term MDS.

If you or a loved one have been diagnosed with Acute Myelogenous Leukemia (AML), Myelodysplastic Syndrome (MDS), Non-Hodgkin’s Lymphoma (NHL) or Mesothelioma Asbestos Cancer or other cancers & diseases, then you need to consult with an attorney to discuss a potential exposure lawsuit. Talk to a Board Certified Personal Injury Trial Lawyer, certified by the Texas Board of Legal Specialization, with 30+ years of legal experience. Call 1-800-883-9858 or click the link below. 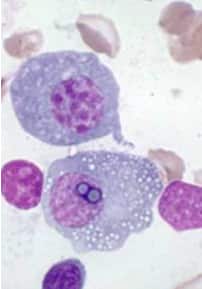